The 2019 field season for LEA’s milfoil program was another productive summer. We were able to spread our focus more evenly this season with the Long Lake infestation under control. Our crew worked into October, bringing Brandy Pond, Songo river, and areas of Sebago Lake under control after some late season growth.

Our accomplishments in Long Lake cannot be overstated. The discovery of milfoil in Mast Cove was a shock to everyone invested in Long Lake’s future. Invasive variable leaf milfoil is a threat to tourism, recreation, property values, and the ecosystem. As soon as we identified this invader in Long Lake, LEA began an intensive, rapid response effort to remove the plants and prevent the spread. We spent weeks of work and tens of thousands of dollars tackling the area and removing hundreds of bags of plants from the infested marina. However, LEA staff remained worried milfoil was not controlled in the area. We continued to find new patches spread throughout Mast Cove and fragments were washing up near the Causeway in Naples. 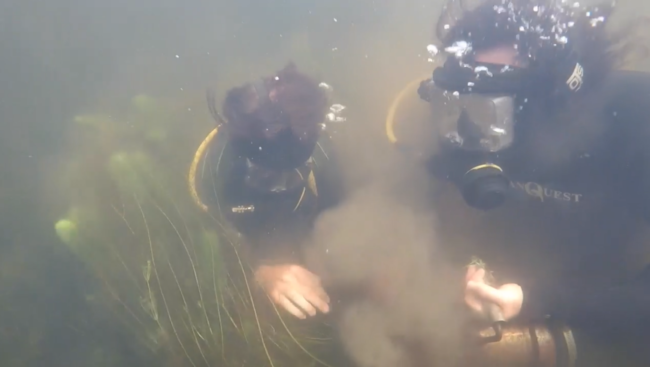 Divers remove a large milfoil plant with the Suction Harvester in Long Lake.

Thankfully, early season survey indicated that our benthic barriers successfully blocked the milfoil from taking root over the winter, and very few individual plants were found outside the marina. The remaining invasive milfoil is generally tucked away in hard-to-reach areas, or rocky shallows we are unable to tarp. The risk of the plants spreading further into Long Lake is low, but the crew will continue to patrol this area until the plants are completely suppressed. As the season progressed we were delighted to a diverse community of native vegetation group up in place of the areas that were once densely carpeted with invasive milfoil.

On the rest of Long Lake, LEA  continued surveying the majority of the shoreline for invasive species. The two areas  found to have plants last season: Salmon Point Campground in Bridgton, and Birch Point in Naples were checked early in the season. The benthic barriers placed in these areas were moved and any plants found were hand pulled. No plants were found when we revisited either site at the end of the season, but they will continued to be monitored for regrowth. Finding so few plants outside of the original infestation site gives us hope that we have successfully prevented this infestation from spreading, but we will continue extensive surveying in 2020.

Because of limited resources and a short summer in 2018, we were unable to spend as much time in Brandy Pond, Sebago Lake, Sebago Cove and the Songo River. These areas showed significant regrowth, compared to years past. Many spots in the Songo River that had been cleared of milfoil for years showed re-growth in 2018, showing the resiliency of this invasive plant, and the tenacity required to manage it. After a concerted, season long effort to regain ground our crew was able to clear the main channel and high traffic coves. Our year-end surveys showed very few plants in areas relatively inaccessible by boat, and we are happy with the current state of these waterbodies.

In Sebago Cove we were unable to spend as much time in the area last season as we hoped, and the milfoil experienced strong regrowth. Adjusting our strategy for the season, we worked extensively in the southern portion to maintain a clear corridor for boats entering and exiting the area to contain the infestation to Sebago Cove. By laying an extensive network of benthic barriers and heavily harvesting the main channel, we maintained a milfoil free route through the Cove for the season. While we maintained this corridor we were able to tackle the regrowth in areas we had worked previously and regained much of the progress that was lost previously.

This work requires long term thinking, making tough choices, and prioritization of goals. This summer, we were able to more evenly spread our time and resources with Long Lake under control made great progress. Looking ahead, this farsighted approach has set us up for a very productive 2020 season which we look forward to with excited optimism to expand our operations.

Interactive map of LEA’s control work in 2019. Zoom in to see areas where control