History of the Milfoil Team 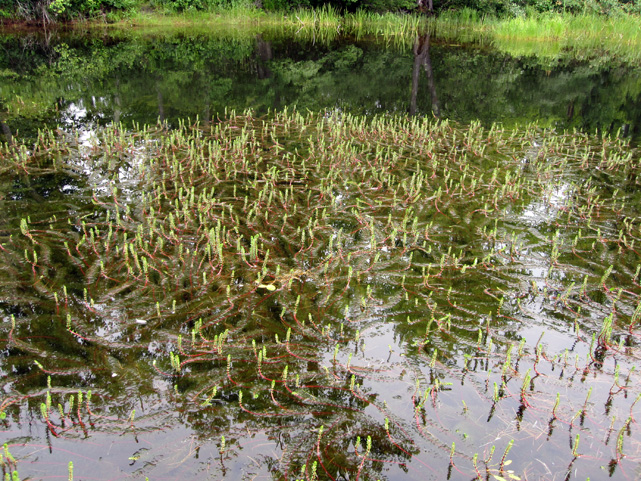 Milfoil on the Songo River

The Songo River and Brandy Pond are among Maine’s busiest waterways.  They act as a boating corridor between the beautiful Sebago and Long Lakes.  This creates more than 30 miles of pristine waters to explore by boat, and is a major vacation destination.  In 2012 more than 3,700 boaters passed through the Songo Lock and another 1,700 entered the Songo River at the Sebago Lake State Park boat launch.

Variable leaf milfoil was documented in a 2003 survey of the Songo River by LEA, which developed a comprehensive plan to combat the infestation. An unknown infesta­tion was then discovered in Brandy Pond in 2004. Some of the plant beds rose to the surface and looked dense enough to walk on. When LEA began work, there were about three acres of variable leaf mil­foil in the upper river and at one marina in Brandy Pond. Much of the river was heavily infested and the plants were spreading rapidly. 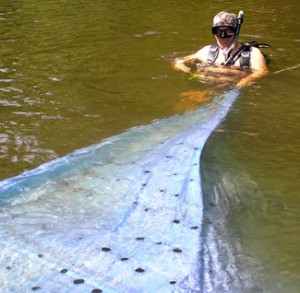 The struggle to control milfoil started on Brandy Pond and con­tinued on the Songo River in 2005. The Libra Foundation awarded LEA a grant to help develop innovative control methods. LEA pioneered the use of blue “Mainer” tarps to tackle the extensive plant beds. The tarps measure 40 feet by 60 feet, allowing LEA to cover substantial areas relatively quickly. Spreading the bottom barriers on the river bottom kills plants by blocking sunlight. When the LEA crew lifted the tarps a barren sandy bottom replaced milfoil growth. The big tarps allowed LEA to get a jump on the infes­tation and reduce the acreage by about a third.

While we were making dramatic progress along the river, infestations developed at all of the commercial and private marinas on Brandy Pond. It was clear that boats coming up Songo River were the major vector for the plants. LEA staff began routine maintenance work at all of the marinas to prevent numerous small outbreaks from expanding. While the large blue tarps were a great success, bottom barriers were difficult or impossible to use in steep sections of the Songo River or where there is a lot of debris. So LEA contracted a commercial suction harvester who worked on removing plants from the river in June 2006. 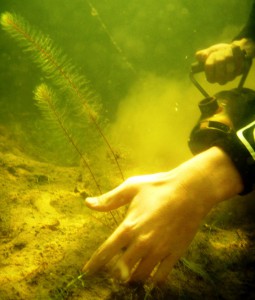 By fall, LEA was able to launch its own suction harvester, thanks to the generosity of the Libra Foundation and Jim Fleck of Bridgton, who donated a pontoon boat. A 28-hp pump on the converted pontoon boat draws water from the river through a four-inch hose. A diver gently pulls up a milfoil plant – trying hard to get the entire root system – and sends the plant up the hose. Water and plants are discharged into a sluiceway then diverted into chutes with mesh bags attached. The bags trap plants, but allow wa­ter to flow through and drain back into the river.

With a seasoned crew, the S.S. Libra and many tarps, LEA made remarkable progress in 2008 and 2009. In August 2008, Dr. Dan Buckley, of the University of Maine-Farmington, surveyed the upper Songo and reported he “was happily surprised to find that over 99 percent of the infestation that we had seen in 2006 was gone . . . Your efforts and those of your abatement crew have worked wonders.” But as LEA staff and volunteers scoured marinas, shorelines and coves, several new patches of plants were found in Brandy Pond, posing a serious threat to Long Lake. In fall 2009, a new infestation was discovered. DEP divers and LEA staff quickly tarped the area to reduce the threat. After years of work and a total cost of about $250,000, LEA finally thought the infestation was under control in 2009. 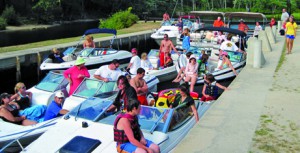 The long hot summer of 2010 resulted in the worst infestation ever on the lower Songo River and high traffic through Songo Lock posed an extreme threat to the upper Songo, Brandy Pond and Long Lake. The lower Songo, from Sebago Lake State Park to Songo Lock, was heavily infested and is one of the busiest waterways in Maine. After inspectors found many boats in the lock carrying milfoil fragments and many more fragments floating in the water, LEA asked the state to close the Son­go Lock. But the process, which involved several state agencies, proved complicated and time-consuming.

The lock remained open, but the Maine Department of Environmental Protection funded increased boat inspections there. The De­partment of Conservation marked the lower Songo with new navigational buoys to help boaters avoid the most infested areas. To minimize this risk, LEA had renewed its plea that boaters not travel upstream through the lock. The more boats traveling through the lock, the higher the risk that one or more will carry milfoil into the upper Songo, Brandy Pond or Long Lake. It’s very difficult to inspect boats in the crowded lock and even a one-inch fragment can root and spread the infestation, which could have a severe impact on the Lake Region’s economy. 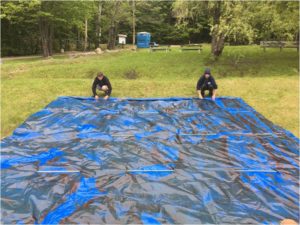 The first survey of Brandy Pond and the upper Songo in June 2011 revealed only a few dozen plants. When the team started its work years earlier, there were three acres of plants. By the time the LEA crew disbanded in August, the 800-foot safety zone below the lock had been cleared, as had the Upper Songo River, Brandy Pond, and Crooked River. This was made possible because of the great work the LEA Milfoil Team had done over the past five years. They did not achieve total eradication, as some plants will re-generate, but we had gained a foothold in the area.

Over the coming years, the milfoil crew continued to work down the Songo River; every year gaining more ground. We perfected techniques of removal and improved our efficiency. Benthic mats especially improved as we engineered ways for them to be easier to deploy and remove them. The mats became our  most successful tool to remove milfoil. Check out  this PDF to learn how we create the mats now: Benthic Barrier Instructions. We were also able to double our milfoil team from a crew of four to eight people. With the improved methods and larger crew the milfoil team tackled acres of the Songo River every year. 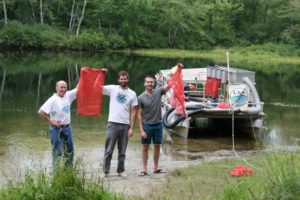 LEA declares Success on the Songo River and Brandy Pond!

Then in 2015, after 11 years of hard work, the LEA declared victory on the Songo River and Brandy Pond. Boaters could pass from Long Lake to Sebago Lake and never see a sprig of milfoil, where once the area was choked by the weed. We declared victory on the Songo for two main reasons.  First, the density of milfoil on the entire length river was much lower than we had seen in previous years.  Even at the height of the growing season there was only one plant for every 100 feet of shoreline, or less. Secondly, there was no known milfoil in the main channel for boat propellers to chop up and spread further.  The majority of the plants were confined to the remote backwaters, away from boat traffic. These water bodies will require annual maintenance to remove errant regrowth or fragments from Sebago Lake, but this work requires significantly less time than removing dense patches.

With Songo and Brandy under control, the milfoil team had more time and resources at their disposal. Instead of dismantling the team, LEA decided to tackle a much larger infestation: Sebago Lake. The sheer size and level of milfoil infestation in Sebago had left the communities around the lake struggling to combat this plant. The crew began its work on Frye Island, in the middle of the lake. A few large marinas has become inundated with milfoil, and a nuisance to the Island. The milfoil team was able to clean the area up in just a couple weeks. The team also removed plants from Pickerel Cove in Windham and Witch Cove in Naples. The team will continue to return to these areas to prevent the milfoil from re-establishing.

In 2016 the LEA began its work on Sebago Cove (Muddy River).  Sebago Cove is a large, shallow inlet in the Northwest of Sebago that is home to one of the worst infestations in the state. In the middle of summer, milfoil grows practically shore to shore. LEA trusts that the experience gained on the Songo River will guide the crew to another victory. However, given the size and density of the infestation, control efforts will take time to achieve that goal.

Unfortunately, in 2017 a dense patch of Milfoil was found in the Mast Cove area of Long Lake, a waterbody previously thought to be free of invasive aquatic plants. LEA and the DEP leapt into action in response, diverting resources to the area to contain the infestation. After two seasons of dedicated focus, the area was returned to a natural state and only sparsely distributed plants could be found.

In 2019, with the Long Lake infestation under control, our crew was able to dedicate more time and resources to our other sites, which had seen some regrowth in the previous seasons.

In the upcoming 2020 season our crew will be expanding, both in size and coverage area. We will begin applying milfoil control efforts to the Northwest River in Sebago Lake  and will deploy a third Milfoil crew to help alleviate the constraints made by working in such a geographically large area.  To learn more about our recent work, read our progress report here!