Brandy Pond, originally called the Bay of Naples, was a primary commercial and recreational travel route during Maine’s early development stages. Today, activities on the Causeway in Naples include seaplane rides, windsurfing and para-sailing.

Because Brandy Pond serves as a passageway between Sebago Lake and Long Lake, coldwater fish species such as landlocked salmon, brook trout, and brown trout can all be found within its waters. In addition to these coldwater fish, Brandy also supports populations of smallmouth bass, largemouth bass, white perch, yellow perch, chain pickerel, hornpout, white sucker, smelts, minnows, cusk and sunfish. Although Brandy Pond is not stocked, Sebago Lake and Long Lake are both regularly stocked with landlocked salmon.

The average Secchi disk reading for 2020 was 6.32 meters, fell into the moderately clear range, and was shallower than the long-term average of 6.56 meters. The average total phosphorus reading of 4.88 ppb fell into the low range and was lower than the long-term average of 6.45 ppb. The average deep water phosphorus value was not significantly above surface water phosphorus values, which suggests phosphors recycling is not problematic. The chlorophyll-a average of 2.38 ppb fell into the moderate range and was less than the long-term average of 2.56 ppb. Long-term trend analysis indicates chlorophyll–a concentrations in Brandy Pond are stable, total phosphorus concentrations are stable, and clarity readings are stable. The average color reading for 2020 was 17.00 SPU, indicating that water in Brandy Pond is moderately colored. Suitable coldwater fish habitat was present through June. In July coldwater fish habitat became unsuitable as water temperature increased and deep water oxygen was consumed. Unsuitable coldwater fish habitat persisted through September. 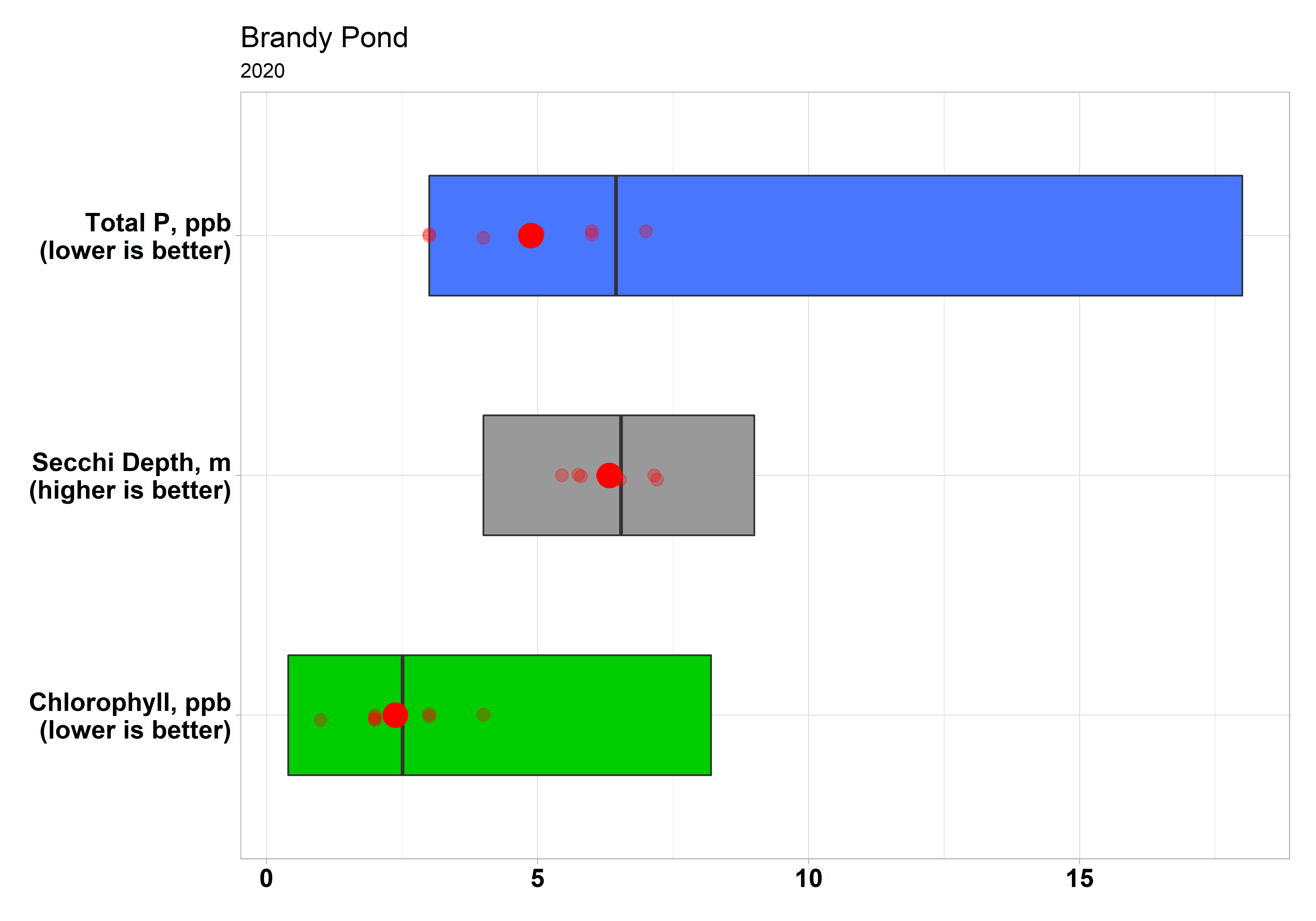 A sur­vey to doc­u­ment ero­sion prob­lems within the Brandy Pond Water­shed began in late April of 2009 and fin­ished in early Octo­ber. Through the sur­vey, vol­un­teers and tech­ni­cal staff iden­ti­fied 73 ero­sion sites within the water­shed. Although most of the sites were con­sid­ered to have a low or medium impact on the pond, the cumu­la­tive impact of all these areas is siz­able. Ero­sion on res­i­den­tial prop­erty and pri­vate roads were the largest prob­lems iden­ti­fied dur­ing the project.

53 percent of soils in the watershed are type A soils. Type A soils tend to be well drained sands, loams and gravels.  When vegetation is removed and the soil is exposed they can be susceptible to erosion. Because they are often coarse with ample pore space, there is low runoff potential and water will not usually pool on them.  These soils can be good places to site leach fields or infiltrate stormwater from a home or residence.

4 percent of soils in the watershed are type B soils. B soils have moderate infiltration rates and fine to moderate texture and soil size. They are usually made up silts and loams. Although not as well drained as A soils, they can also be good places to site leach fields and infiltrate stormwater.

15 percent of soils in the watershed are type C soils. C soils have low infiltration rates and typically have a layer that impedes the movement of water. These soils are made of sands, clays and loams and are one of the most common soil types in western Maine.

2 percent of soils in the watershed are type D soils. D soils have a high runoff potential and very low infiltration rates.  Soils with a high water table, clay or other impervious layer near the surface are typically D soils.  These soils are often associated with wetlands.

1 percent of soils in the watershed are type C/D soils. C/D soils are a mix of these two soil types.  They have fairly high runoff potential and low infiltration rates and often pool water.

The remaining 25 percent of the watershed is taken up by the pond.