Keoka Lake was originally called Thomas Pond, after Thomas Chamberlain who supposedly hid under a rock along the shore when he was chased by Native Americans. The northwestern side of the lake was settled in the late 1700s and soon became known as “The Flat.” Today, the lake is enjoyed by boaters, anglers, swimmers and sightseers.

The average Secchi disk reading for 2021 was 6.8 meters, which falls into the moderately clear range. The
average total phosphorus reading of 6.8 ppb falls into the moderate range. The average deep water phosphorus value was not significantly above surface water phosphorus values, which suggests phosphorus recycling is not problematic. The chlorophyll average of 3.1 ppb falls into the moderate range. Long-term trend analysis indicates chlorophyll concentrations in Keoka Lake are stable, total phosphorus concentrations are decreasing, and clarity readings are increasing. The average color reading for 2021 was 25.9 SPU, indicating that water in Keoka Lake is highly colored. Suitable coldwater fish habitat was present through June. As water temperatures increased and deep water oxygen was consumed, coldwater fish habitat became moderate in July and became unsuitable from August through September. Low oxygen conditions were present in deep water from June through September. 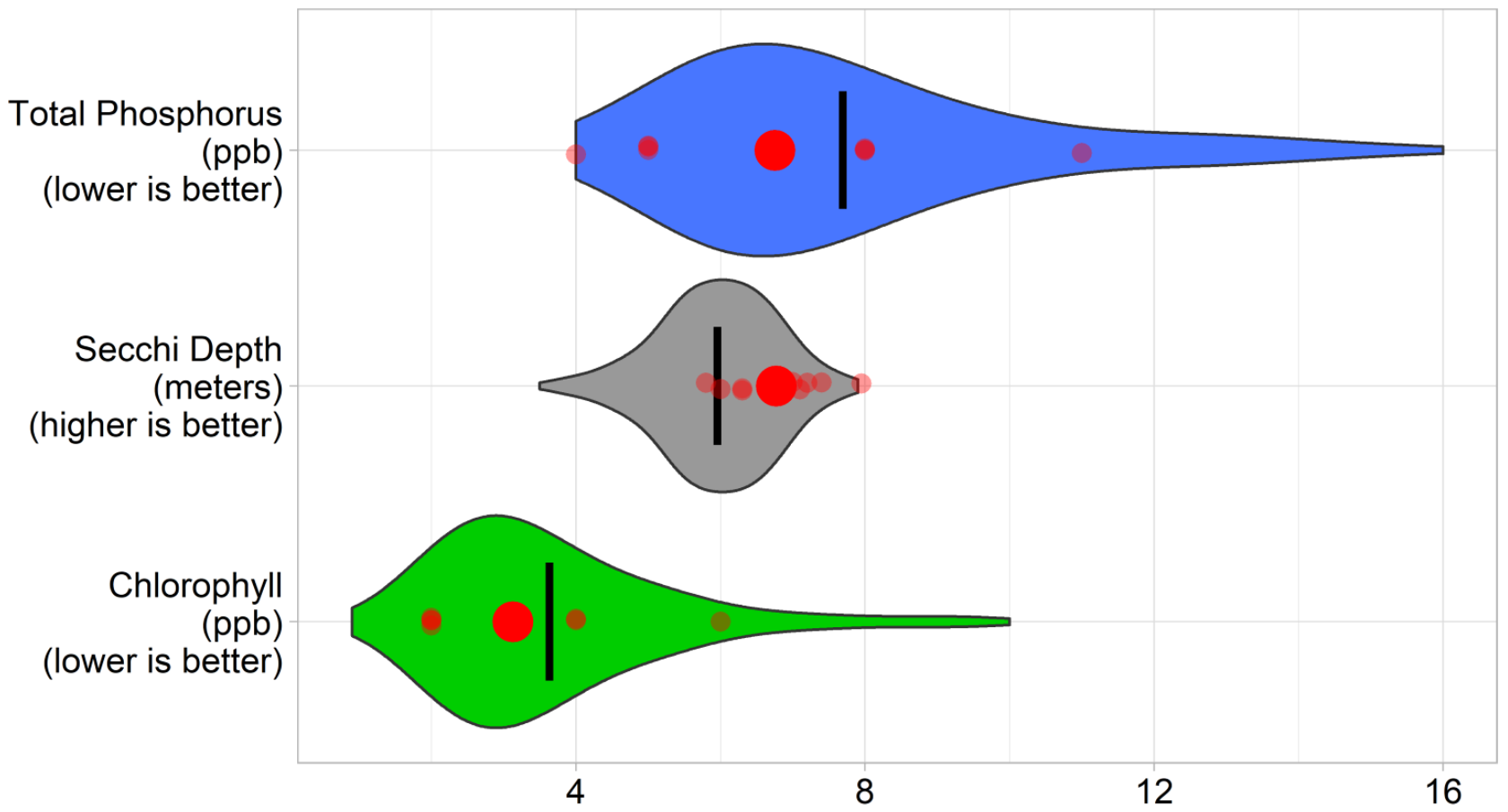 The Keoka Lake Watershed Project involved surveying, documenting and then fixing areas within the Keoka Lake Watershed that were eroding and causing a negative impact on Keoka’s water quality. During the survey portion, volunteers from the Keoka Lake Association and residents from within the watershed as well as staff from the Department of Environmental Protection, the Soil and Water Conservation District and LEA helped locate, map out and document 65 sites where erosion was occuring. This information was then compiled into the Keoka Lake survey report which functions as a landowner handbook and reference for future mitigation work. Based on evaluations made in the survey, priority sites were chosen and then construction and mitigation work began on these sites to correct ongoing erosion. As part of this project, water quality improvements were completed on Plummer Hill Road, Mill Hill Road, the Johnson Road, Loon Echo Drive, Kimball Trail, Keoka Campground, the Hawk Mountain access road, at the boat launch and on individual lots.

4 percent of soils in the watershed are type A soils. Type A soils tend to be well drained sands, loams, and gravels. When vegetation is removed and the soil is exposed they can be susceptible to erosion. Because they are often coarse with ample pore space, there is low runoff potential and water will not usually pool on them. These soils can be good places to site leach fields or infiltrate stormwater from a home or residence.

2 percent of soils in the watershed are type B soils. B soils have moderate infiltration rates and fine to moderate texture and soil size. They are usually made up silts and loams. Although not as well drained as A soils, they can also be good places to site leach fields and infiltrate stormwater.

71 percent of soils in the watershed are type C soils. C soils have low infiltration rates and typically have a layer that impedes the movement of water. These soils are made of sands, clays, and loams and are one of the most common soil types in western Maine.

2 percent of soils in the watershed are type D soils. D soils have a high runoff potential and very low infiltration rates. Soils with a high water table, clay or other impervious layer near the surface are typically D soils. These soils are often associated with wetlands.

10 percent of soils in the watershed are type C/D soils. C/D soils are a mix of these two soil types. They have fairly high runoff potential and low infiltration rates and often pool water.

The remaining 11 percent of the watershed is taken up by the lake.