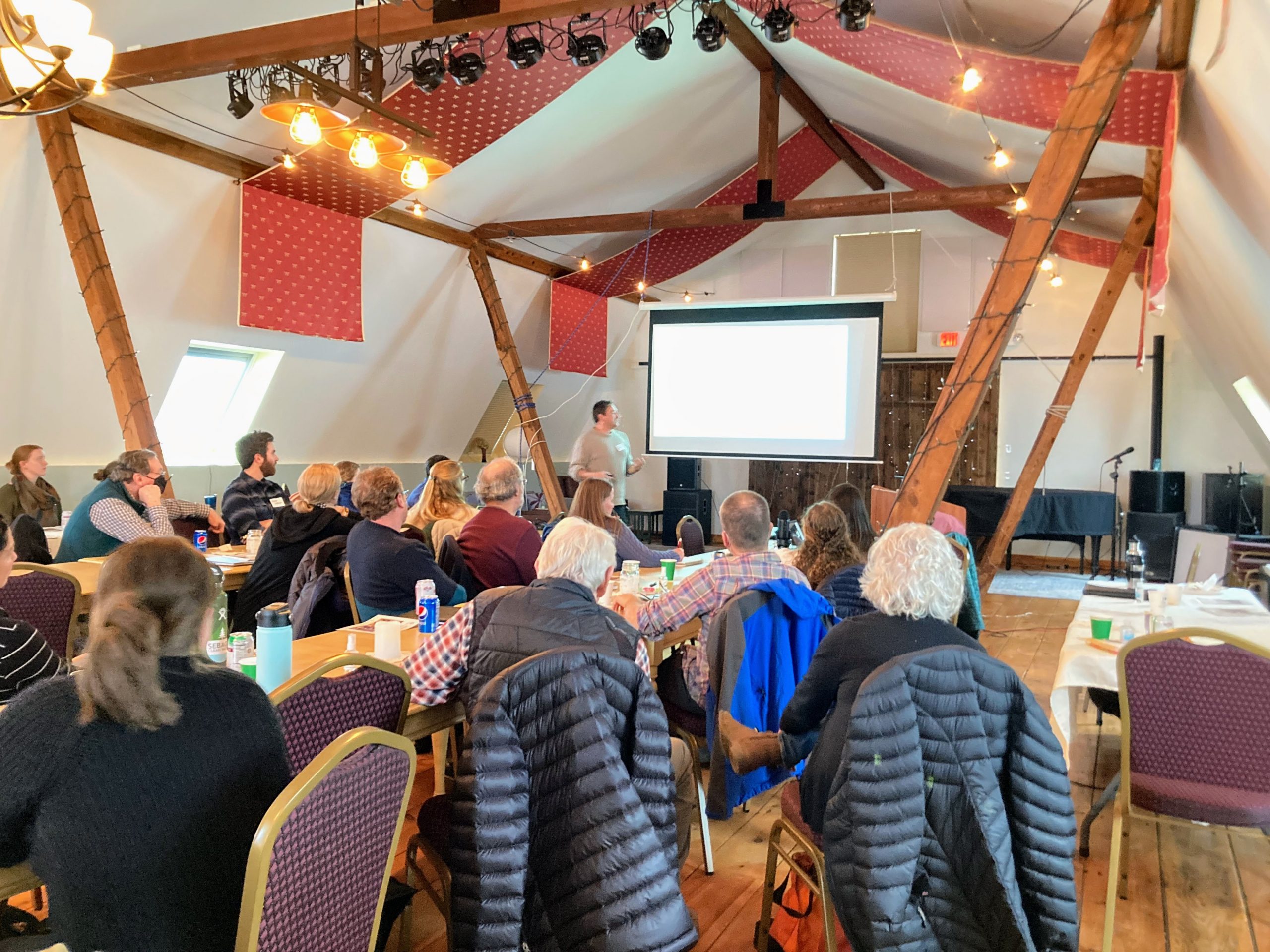 Last Friday, lake experts and researchers from across the state of Maine and beyond met in Bridgton to discuss the latest news and findings regarding lakes and freshwater systems in New England. This gathering of about 50 specialists was put on by Lakes Environmental Association at the beautiful Dragonfly Barn at the top of Sanborn Grove.

While some of the talks were quite technical, the themes were basic, important, and relative to anyone living in this area or on a lake in Maine.

One of the talks I found most interesting was regarding Long Pond in Parsonsfield. This pond is 275 acres and a mere 48-minute drive south of our office in downtown Bridgton and just outside LEA’s direct service area. Long Pond has been monitored since 1983 by local volunteers and traditionally had good water quality. Although clarity was still good in 2013, the Maine Department of Environmental Protection (MDEP) noticed an alarming trend. The clarity on the lake was decreasing. Four years later, whole-lake algae blooms started occurring and the clarity plummeted. Lakefront landowners and the community were taken by surprise and experts and contractors were brought in to assess the situation and make a plan.

After five years of pre-work, a permit was approved for a Chemical Discharge Management Plan by the MDEP in 2022, and a company was hired to spread two types of aluminum over the lake to sequester the nutrient phosphorus and quell the algae bloom. This type of action called an “Alum treatment”, is commonly used to remove phosphorus from the water column and stop the nutrient from being resuspended into the lake from bottom sediments for the next 10-20 years. This treatment and associated planning and monitoring cost about $345,000 to date which is about $1,250 per acre. If that cost does not seem intimidating, remember that Long Pond is fairly small. To treat a lake like Highland would cost about 6.5 million. For Moose Pond, the same treatment would cost around 14 million.  For Long Lake, it would be around 42 million. That is intimidating. And remember, alum treatments have a shelf life so in another 20 years, be ready for the next round. The good news is that alum can be very effective if properly dosed and applied but it was a sobering presentation.

Several talks touched on the identification of algae species using environmental DNA. This field is rapidly expanding and this methodology can also be used to identify whether invasive aquatic species are present in a waterbody by just grabbing a few water samples from around the lake. Knowing the type of algae in our lakes is needed to determine appropriate treatment methods and whether there are toxicity concerns. Our organization is particularly interested in using eDNA (as it is affectionately called) to identify whether invasive species may be in a waterbody before these species become well established. This is a very useful tool in the prevention realm that could save thousands of dollars in surveying every year and hundreds of thousands of dollars if invasive species are caught early.

Another session that I found fascinating was about using microplastics to date lake sediment cores.  Unfortunately, plastics are ubiquitous in the environment and LEA has found them in all the lakes in our area but eventually most sink to the bottom and get buried in the sediment. Over the years, plastics have become more common, and different types of plastics have entered the world.  These specific types of plastics can be used to date algae and other natural and man-made occurrences in the top several centimeters of a lake much like researchers use radioisotopes of gas taken from frozen ice core bubbles in the Antarctic.

Other talks focused on the assessment of the lakeshore and shallow water areas to determine lake health, mercury levels in our freshwater fish, and the surprising effects of the Clean Air Act on Maine’s mountain and alpine lakes.

During the retreat, numerous attendees brought up how helpful it is to have everyone come together in one place to give these research updates. It is a rapid overview of some of the best lake work being done in the area that both lake managers and researchers alike can learn from. I certainly felt that way too. This event was made possible by all the presenters who donated their time and expertise, LEA’s staff, all our members who financially support our work, and Lauren and Richard Packard who donated the venue.