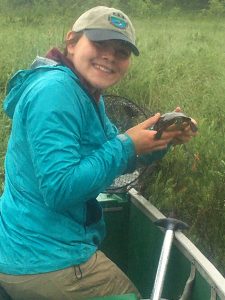 By LEA Intern, Shannon Nelligan (pictured at left with a painted turtle)

As a water testing intern for Lakes Environmental Association, my primary job is to travel to all the different lakes and ponds in the surrounding hills, monitor water quality conditions, and collect samples to be analyzed in-house or at the State labs in Augusta. Although my job sounds pretty good to most people (I skipped over the cleaning, gardening, and trail work…), once in a while I get pulled in to help out with something new that makes me realize all over again how amazing my job is.

Earlier this summer, one of the LEA employees, Alanna Doughty, started work on a turtle survey with the Maine Department of Inland Fisheries and Wildlife. This survey documents species and estimates population sizes of the turtles that inhabit one of the LEA’s greatest hidden treasures, Holt Pond. The Holt Pond Preserve is an isolated pond with a mix of bogs and forest on either side, and provides habitat for many different organisms such as turtles, bass, frogs, birds, and mammals like beaver, bobcat and deer. 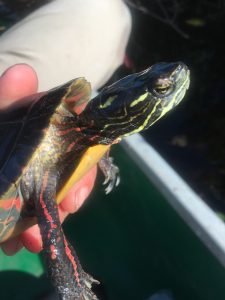 One morning Alanna asked me to help her check traps. The traps are very similar to an old-fashioned lobster trap, but instead of metal it is a cloth-like material. They are designed so the turtles can get into the trap without harming themselves but cannot easily escape. There is also a zipper on the side in case we catch a large snapper and it needs to be taken out sideways. Inside is an empty water bottle to keep the trap afloat, as turtles don’t have gills and need to breathe air.  As instructed, we used canned sardines as bait. The can is cracked open just a tad so the smell and taste of sardines is present but the turtles or other critters cannot eat what is inside. To make sure the turtles are not harmed by staying in too long, the traps are checked every day and the turtles are released once found.

If a turtle is found, it is then marked and documented. This mark, which does not harm them, is done by filing small notches into the edge of the shell. Each notch corresponds to a number resulting in a unique ID number for each marked turtle. The plan is to conduct these surveys every decade to monitor their populations. The turtles we were studying can live up to 40 years in the wild so collecting this data over a long time frame is critical to understanding if populations are experiences changes. If a marked turtle is recaptured, then we will have a better understanding of where the turtles travel and how they aged.

Alanna said that one the first day of trap checks, there were 42 turtles documented. On the day I went out, we caught about 20 painted turtles and one medium sized snapping turtle. The traps were set alongside the shores and in the bogs.  At one point, we had to slog out into the center of the quaking bog to find some traps that were placed out in the middle to represent all the various habitats of Holt Pond. 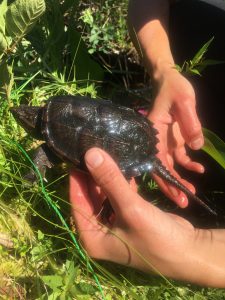 As we walked to the traps, we had to be careful because the water level had risen dramatically during the survey period. One misstep and you could easily sink in muck up to your waist. Turtle surveying may not have been the most glamorous part of my job (and definitely not the cleanest) but it certainly was both amazing and rewarding!

This work with the Maine Department of Inland Fisheries and Wildlife (MDIFW) is adding to data collected along the entire Eastern seaboard to determine species ranges and populations. Another short survey has since happened on Willett Brook, and we plan to do a survey at the Highland Research Forest. Documented reptiles and amphibians are also added to iNaturalist (check out the app if you haven’t already!) and the Maine Amphibian and Reptile Atlas Project that is an ongoing effort to document the distribution of amphibian and reptile species throughout Maine. By participating in scientific studies such as this, the Lakes Environmental Association is working to understand more about population biodiversity in our local lakes and wetlands. 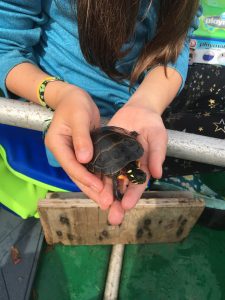