Keyes Pond, located in Sweden, is named after Solomon Keyes, who was part of Colonel Lovewell’s infamous 1725 expedition in the area. Reportedly, Solomon swam across the pond to escape harm during a violent encounter with the native people of the region. Keyes Pond drains into the Kezar River, which is part of the Saco River Watershed.

Most of the year, Keyes Pond has suitable habitat for trout. During the late summer, however, the amount of cool, well oxygenated water that cold-water fish need is limited. But enough cool well-oxygenated water remains to support a viable brook trout population. The Maine Department of Inland Fisheries and Wildlife stocks brook trout in Keyes Pond each spring. An abundant smelt population provides an excellent forage base for the trout. There is some brook trout reproduction in both the inlet and the outlet, but stocking is necessary to provide enough trout to sustain a good fishery. Anglers can also target smallmouth bass, which were illegally introduced into the pond. Keyes Pond has extensive gravel shorelines which provides excellent spawning habitat for the smallmouth bass. An abundant crayfish population and smelts provide the primary forage for bass. Chain pickerel, pumpkinseed sunfish, minnows and hornpout are also found in the pond.

The average Secchi disk reading for 2021 was 6.2 meters, which falls into the moderately clear range. The average total phosphorus reading of 7.1 ppb falls into the moderate range. The average deep water phosphorus value was not significantly above surface water phosphorus values, which suggests phosphorus recycling is not problematic. The chlorophyll average of 2.3 ppb falls in the moderate range. Long-term trend analysis indicates chlorophyll concentrations in Keyes Pond are stable, total phosphorus concentrations are decreasing, and clarity readings are increasing. The average color reading for 2021 was 29.0 SPU, indicating that water in Keyes Pond is highly colored. Suitable coldwater fish habitat was present through June. As water temperatures increased and deep water oxygen was consumed, coldwater fish habitat became marginal in July and unsuitable in August and September. 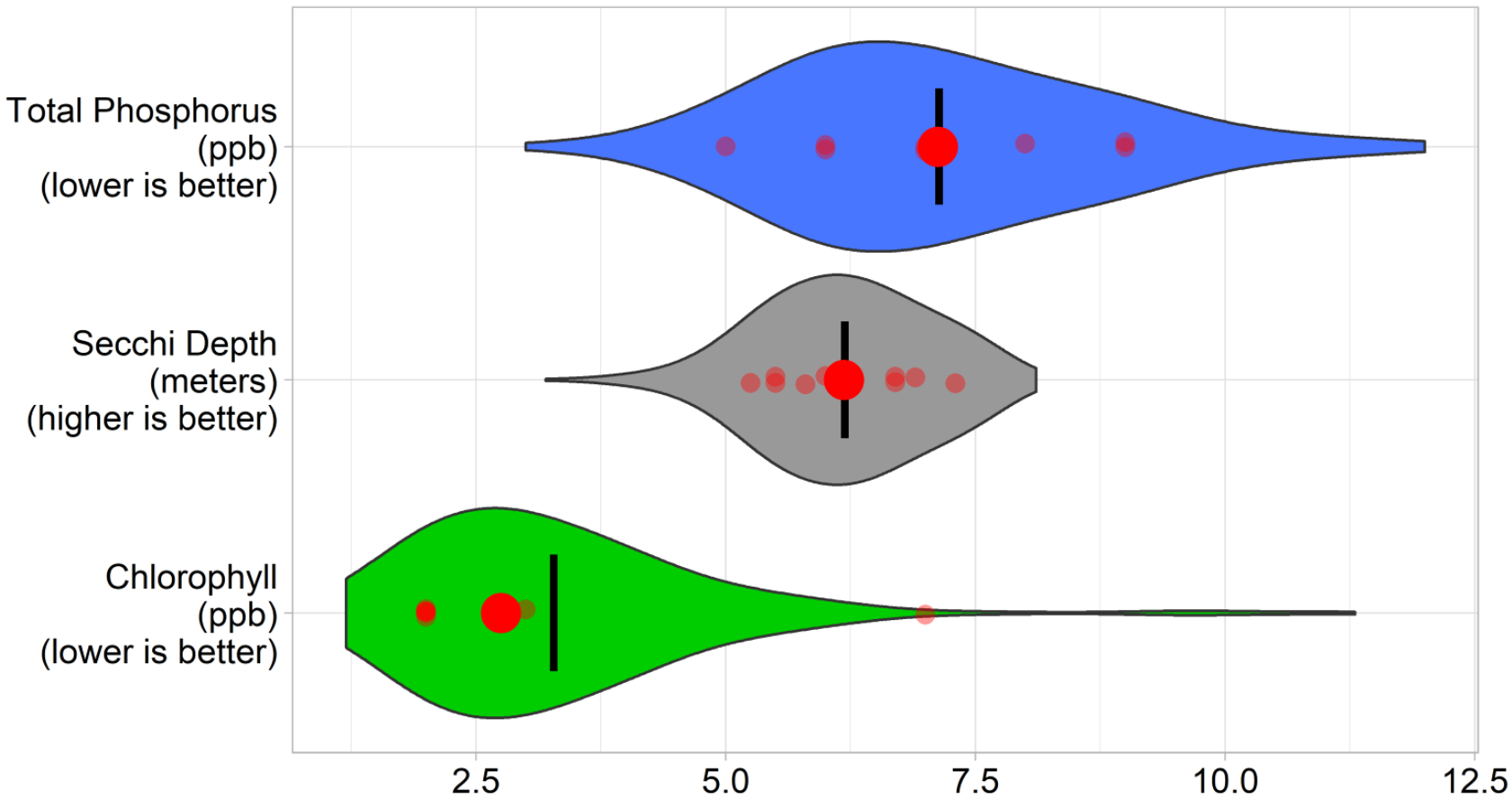 1 percent of soils in the watershed are type A soils. Type A soils tend to be well drained sands, loams, and gravels. When vegetation is removed and the soil is exposed they can be susceptible to erosion. Because they are often coarse with ample pore space, there is low runoff potential and water will not usually pool on them. These soils can be good places to site leach fields or infiltrate stormwater from a home or residence.

1 percent of soils in the watershed are type B soils. B soils have moderate infiltration rates and fine to moderate texture and soil size. They are usually made up silts and loams. Although not as well drained as A soils, they can also be good places to site leach fields and infiltrate stormwater.

81 percent of soils in the watershed are type C soils. C soils have low infiltration rates and typically have a layer that impedes the movement of water. These soils are made of sands, clays, and loams and are one of the most common soil types in western Maine.

1 percent of soils in the watershed are type D soils. D soils have a high runoff potential and very low infiltration rates. Soils with a high water table, clay or other impervious layer near the surface are typically D soils. These soils are often associated with wetlands.

3 percent of soils in the watershed are type C/D soils. C/D soils are a mix of these two soil types. They have fairly high runoff potential and low infiltration rates and often pool water.

The remaining 14 percent of the watershed is taken up by the pond.